In September 1948, a letter appeared in The Montreal Gazette noting the demolition of Fairmount Villa, a house that had stood on Sherbrooke Street near Saint Urbain for over 100 years.1 Today, that house has been gone for 70 years, but it is still not entirely forgotten: in 1892, Fairmount Avenue, in Montreal’s Mile End neighbourhood, was named to commemorate the house.2

Fairmount Villa was the home of my great-great-grandparents, Montreal notary and landowner Stanley Clark Bagg (1820-1873,) or SCB, and his wife, Catharine Mitcheson Bagg (1822-1914). SCB died of typhoid at age 53, but Catharine continued to live in the house with her son and four daughters until they married, and she remained there until her death at age 92.

After Catharine’s death, the house was sold to the Asch advertising company, which eventually became known as Claude Neon. The City of Montreal expropriated the property in 1948 in order to widen Saint-Urbain Street.

The property records go back 300 years. In 1701, the land on which the house later stood was owned by a religious community known as the Charon Brothers, and the Grey Nuns (Soeurs grises) inherited it in the mid-1700s. Around 1780, the sisters sold three lots at the crest of the hill where Sherbrooke Street was later to become a major artery, and those lots were subdivided and resold several times.3In 1837, merchant Stanley Bagg purchased lot number 58A at a sheriff’s auction.4(When a land owner was unable to make his payments, the sheriff seized the property and auctioned it off, often at a bargain price for the new buyer.)
When SCB and Catherine were married in 1844,5 Stanley sold the property to his only son. It was a long, narrow lot at the north-west corner of Sherbrooke Street, running 2½ arpents north along Upper Saint–Urbain Street to the property line of Durham House, where SCB was born and grew up.
The notarial act in which the transfer was recorded described the Fairmount property as having “a two-storey stone house and other buildings thereon erected.”6 The house was probably still under construction in 1844, and SCB and Catherine lived at Durham House with Stanley for a few years. Their first child, who died at age two, was born at Durham House, but the others were all born at Fairmount Villa.
Some years later, an addition was added to the west side of Fairmount Villa. It included SCB’s office and a second front door so that farmers coming to pay the rent they owed to SCB did not have to walk through the house to get to the office.7
In his letter to The Montreal Gazette, SCB and Catharine’s grandson Rev. Sydenham Bagg Lindsay explained that the name Fairmount Villa was reminiscent of Philadelphia. Catharine Mitcheson grew up in a rural area just north of Philadelphia called Spring Garden.8 (It is part of the city today.) Philadelphia’s famous Fairmount Park was located nearby. The naming of Fairmount Villa after a place associated with Catherine’s early life was something of a family tradition: the house in which Catharine grew up was called Menteith House, after Catharine’s mother’s birthplace, Menteith, Perthshire, Scotland.
Sydenham also noted there was a family chapel at Fairmount Villa, called the Oratory of the Holy Cross. “The stained glass window in this chapel depicted Christ as the Savior of the World; it was given in recent years to the Anglican Church at Lake Echo….”9 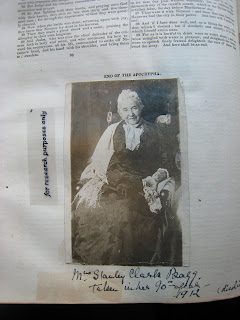 Sydenham’s younger brother, Stanley Bagg Lindsay, also recalled visiting Granny Bagg: “We can remember her well sitting at the front drawing room window at Fairmount with her white lace cap on, looking out at the people passing.”10
He continued, “We used to play in Granny’s garden. There were apple trees, especially one which was easy to climb and play house in. There was an iron bench under it, painted blue green…. There was a chestnut tree which we loved, the summer house, the white statutes of Adam and Eve with no arms, … the bleeding hearts, snowballs and lilacs … Nora the housemaid and Jessie the cook, who made good ladies fingers and sponge cakes and who we could always see through large sunken window which gave light to the kitchen.
“There were the stables, the horses, the rockaway and the brougham and Willis the coachman with white mutton chop whiskers whom we liked and who afterwards drove a wagon for Joyce the confectioner. We were very fond of Odell Comtois who did sewing…. She was practically one of the family.
“The garden became very shabby,” he concluded. “It seemed a large garden to us. It went as far as our house which was at the corner of Milton Street. The west side adjoined the Wilson-Smith property. Long before our house was built, a large house called Tara Hall stood just north of Milton Street. Mother [Mary Heloise (Bagg) Lindsay] remembers it burning down one night when she was a child. Where the house used to stand is a street called Tara Hall.”10
Clarifications added Jan. 16, 2020